How Does A Perk Test Work? 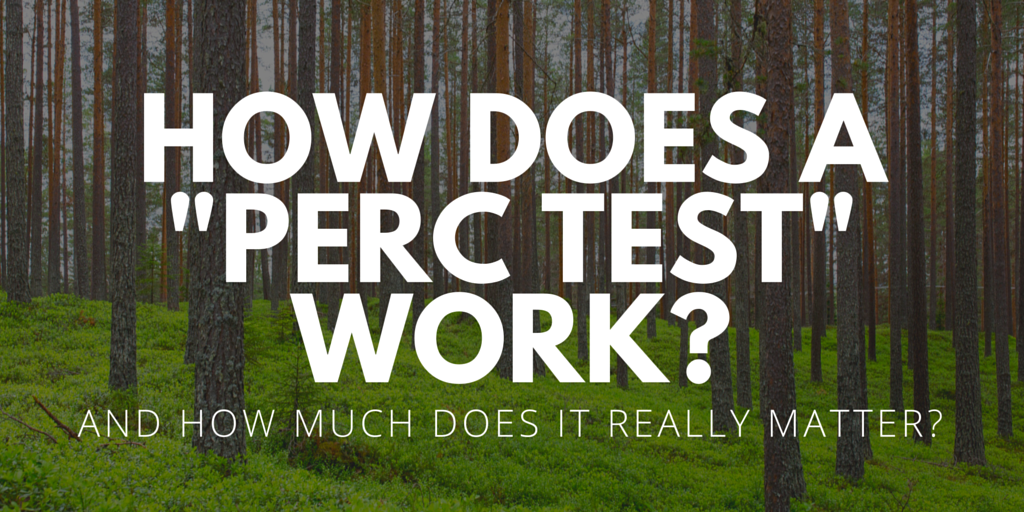 What Is A Perc Test And Why Do I Need One

You may be asking, "What is a Perc Test. A Perc Test is short for percolation test. No we are not talking the old fashioned way of making coffee. We are discussing whether the soil on your lot  will allow you to put in a septic system. Traditional septic systems only work if the soil in the leach area is sufficiently permeable that so it c can absorb the liquid effluent flowing into it.  There must also be at least a few feet of good soil from the bottom of the leach pipes to rock or  hardpan below, or to the water table. The  standards and regulations may be vary from town to town. All is not lost if your ground does not perc. In some cases, an alternative septic system may be allowed.

NO PERC, NO HOUSE
On sites without municipal or private sewage systems, you'll need a traditional septic system, or a more expensive alternate system. It is a good idea to  make any offer to purchase land contingent on the site passing the soil and perc tests. As prime building sites become  in many parts of the country are being scooped up sites that don't lie on a sewer system are becoming a necessary alternative.

Basically soils with high sand and gravel content drain the best and soils with a high clay content or solid rock are less apt perc correctly. Most soils fall somewhere in the middle with a mix of course sand and gravel particles, small silt particles, and miniscule clay particles. To get a rough idea before investing time and money in testing, dig below the top few inches of topsoil to the lighter soil beneath. If you can take a handful of the damp subsoil and roll it into a thin, flat shape or worm shape that holds together, and it had a sticky firm texture, the soil has a high clay content and will probably fail a standard perc test.

The two main tests used to determine a site’s suitability are a soil evaluation and percolation or perc test. Testing requirements vary greatly from state to state and often from town to town, as most states allow individual towns to establish separate rules within state guidelines. So make sure you talk to your town health officer about what tests are needed, when they can be done, and who should perform them. Whether or not a licensed professional is required, it’s a good idea to hire an seasoned expert with local experience as many of these tests have a bit of wiggle room.

DEEP HOLE TEST
Most tests start with a deep hole test dug by machine to well below the bottom of the proposed leach field – often 7 to 10 feet deep or greater. Soil samples may be taken back to the lab, or a visual test of soil layers may be sufficient. Soil tests (or observations) are used to identify the drainage characteristics of the soil, and the seasonal high water table is identified by examining splotches of color or “mottling” in the soil indicating the presence of water. The soil types, high water table, and depth of rock or impermeable hardpan are documented.

While most soil experts believe they have enough information at this point to design an effective septic system, most states today also require perc testing to directly measure the rate at which water percolates through the soil. The test measures how fast water drains into a standard-sized hole in the ground. The results determine whether the town will allow a septic system to be installed, and system designers use the results to size the leach field.

PERC TESTING
To conduct a perc test, first talk to the local health department official as requirements can vary significantly from town to town as far as who can conduct the test, the minimum number of holes, depth of holes, required absoption rates, and when the tests can be performed. In general, tests cannot be conducted in frozen or disturbed soil, and some areas only allow tests during certain months of the year – so plan ahead.

A standard septic system will only work if the soil is sufficiently permeable to water, as determined by a “perc” test. If the test fails, . A typical perc test consists of three or more holes dug about 30 to 40 feet apart in the proposed drain field area (see illustration). The holes are typically 6 to 12 inches in diameter and two feet deep, the typical depth of the trenches in a leach field. Two inches of clean sand or gravel are placed in the bottom of the hole. Since the perc test is meant to simulate the actual conditions in a working septic system, the soil is then “pre-soaked” for several hours.

Next, each hole is filled with water to a depth of 6 inches above the gravel and measures how much the water drops in 30 minutes (or less for highly permeable soil that drains quickly). The drainage times are documented and used to calculate the percolation rate – the time it takes for the water to fall one inch. This is usually expressed in minutes per inch of drop. A rate of 60 minutes per inch is normally the cutoff point for a standard gravity-flow septic system, although the number vary from state to state. Test results in Arizona are good indefinitely, unless something drastic has changed the lot.

﻿In Arizona we have certain areas where a standard septic system cannot be installed, such as on top of rock, or a steep slope. If this is the case there are alternative systems that will still allow you to build on your lot. But you will need to contact an experienced geotechnical engineer  to discuss your options. All in all septic systems are quite common and should not be a deterrent to building. But do get your property tested. The cost for a typical perc test is about $750.00 in my area. And it is well worth it.